So, what exactly is a ruyi sceptre? 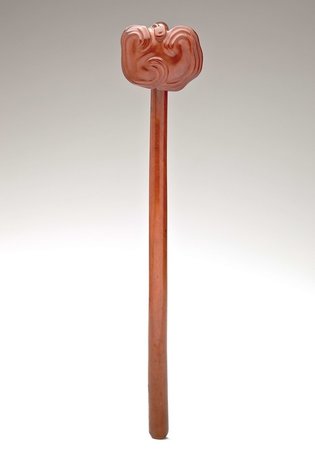 For the last few years we have been holding annual exhibitions during Asia Week New York, quite often showing Chinese Scholar’s objects; and guaranteed to raise a lot of interest and prompt the ‘what on earth is that?’ question, is the ruyi sceptre. Mounted and taken out of context and often now displayed as a purely aesthetic object, ruyi sceptres have been depicted for centuries in Buddhist and Daoist art.

The origin of the ruyi sceptre is obscure, although most of the later representations take the form of a lingzhi fungus. The ‘S’ shaped sceptre-like object, held in the hand, is seen frequently from the earliest period in China and gradually develops into the ruyi form.

According to the, ‘Encyclopedia Sinica’, the 13th century writer Zhao Xigu, believed that they were originally made of iron and used to point the way and for self defence. Over time the ruyi sceptre became associated with the lingzhi fungus and its Daoist longevity symbolism, thus making it an ideal gift, especially for birthdays, but also as a token of the wish ‘what one wants’ (ruyi).

The ruyi we are showing here is made out of huangyangmu (boxwood) and has a naturalistically carved head in the form of the lingzhi fungus, with a thin undulating stem hollowed out at the back and terminating in a rounded head. This one dates to the Qing dynasty, 18th century and has been on loan to Yale University Art Gallery, 1989-98 (8.1989.09) and formed part of the prestigious Ian and Susan Wilson collection, San Francisco, collection number C59. It was first exhibited and published by us in our catalogue, 'Nicholas Grindley, November 1998', no. 7 and then latterly in, ‘Nicholas Grindley, March 2016’, no. 10 (copies of which can be purchased from us via our Publications page on our website).