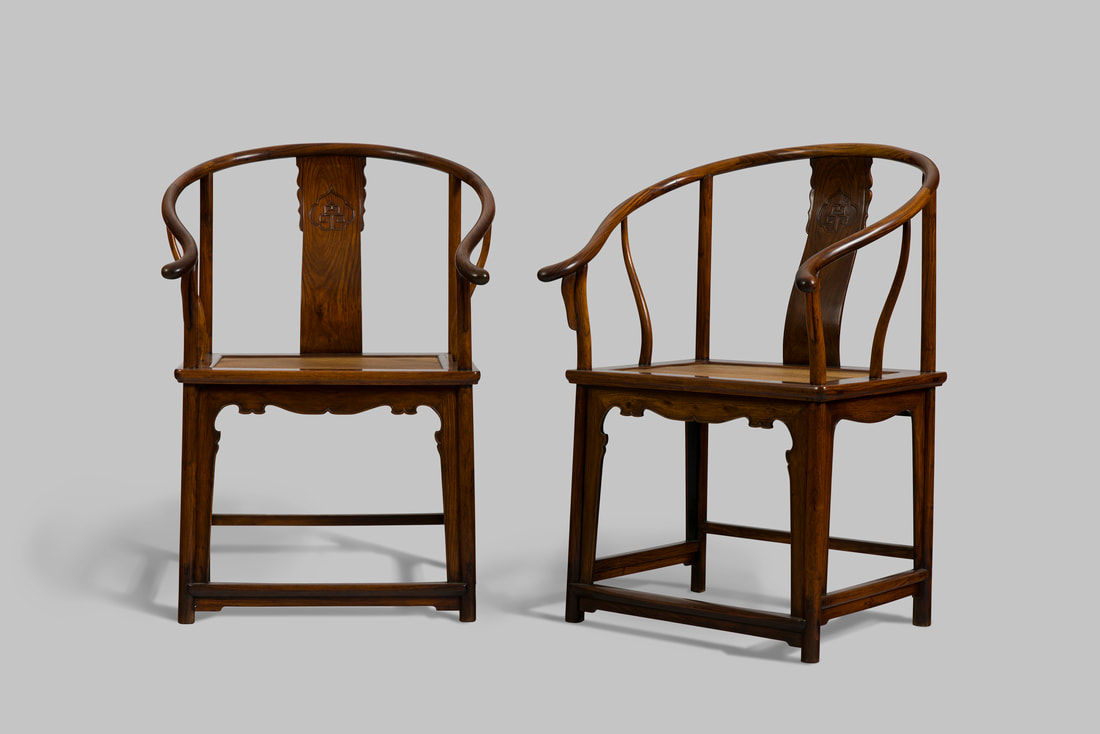 A pair of huanghuali horseshoe armchairs with five-part pressure-pin overlapping scarf joints supported on circular-section rear posts that continue through the seat frame to form the back legs. The front legs are of similar construction, circular in section above and beneath the seat rail with a square shoulder to support the seat frame and are tenoned into the underside of the arm with small spandrels beneath the out-curving ‘handles’. The S-curved splat with a central roundel flanked by scrolling brackets with raised beaded edges. There are S-shaped tapering braces between the arm and the side rails of the seat frame. The seat is of typical mitred, mortice and tenon construction, converted to a hard-matting seat. The tenons are exposed in the short rails of the seat frame that is finished with a plain cushion moulding with a square shoulder below. The square-section stretchers between the legs have a gently rounded outer face and are arranged in ascending heights from the foot rest. The side stretchers, back stretcher and foot rest have exposed tenons. The mitred front apron is carved with a moulded edge on the upper section and the uprights and there are traces of intertwined tendrils that have subsequently been removed from the centre. The mitred side aprons are finished with an incised line reflecting the raised bead on the front aprons. The rear apron is constructed from one piece with short shaped ears, as is the apron beneath the foot rail.
Late Ming–early Qing dynasty, 17th century. 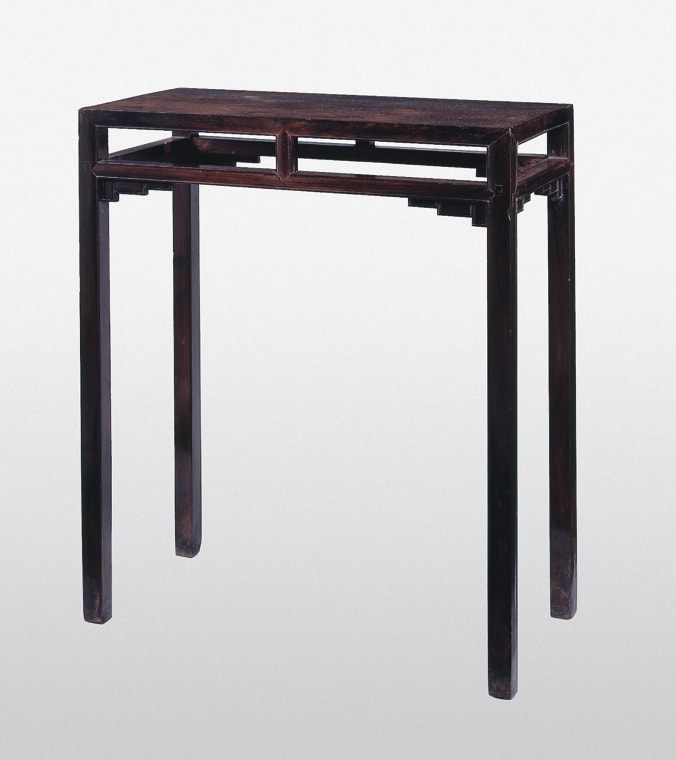 A rectangular hongmu table with a single plank unframed top, the outside edge of square section, save for a raised bead to the lower edge. The square section legs are mitred, mortice and tenoned into each corner of the solid top and are joined by a straight horizontal stretcher, mitred and through tenoned into the legs and also carved with a raised bead to the upper and lower edges. There are two central posts, similarly carved and joined between the stretcher and underside of the top. In each corner beneath the stretcher are small solid brackets, replaced, tenoned into the legs and the stretcher and carved with a raised beaded edge.
Qing dynasty, probably second half of the18th century. 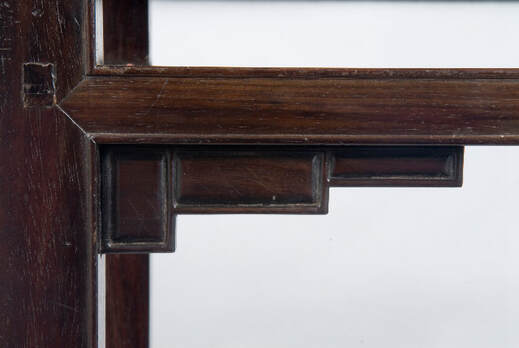 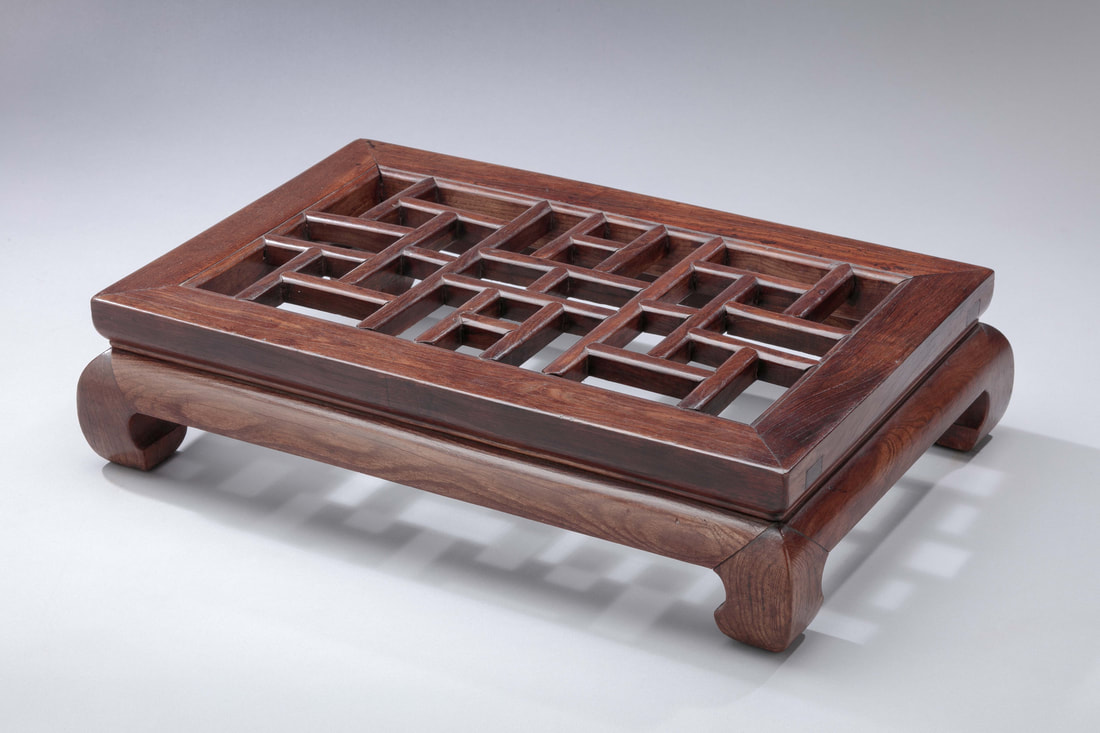 A zhazhenmu foot rest, with a latticework top set within a mitred, mortice and tenon frame with exposed tenons in the short rails. The outside edge of the frame curves gently down with a shallow waist below and plain aprons with short curved legs terminating in horsehoof feet.
Qing dynasty, 18th - 19th century. 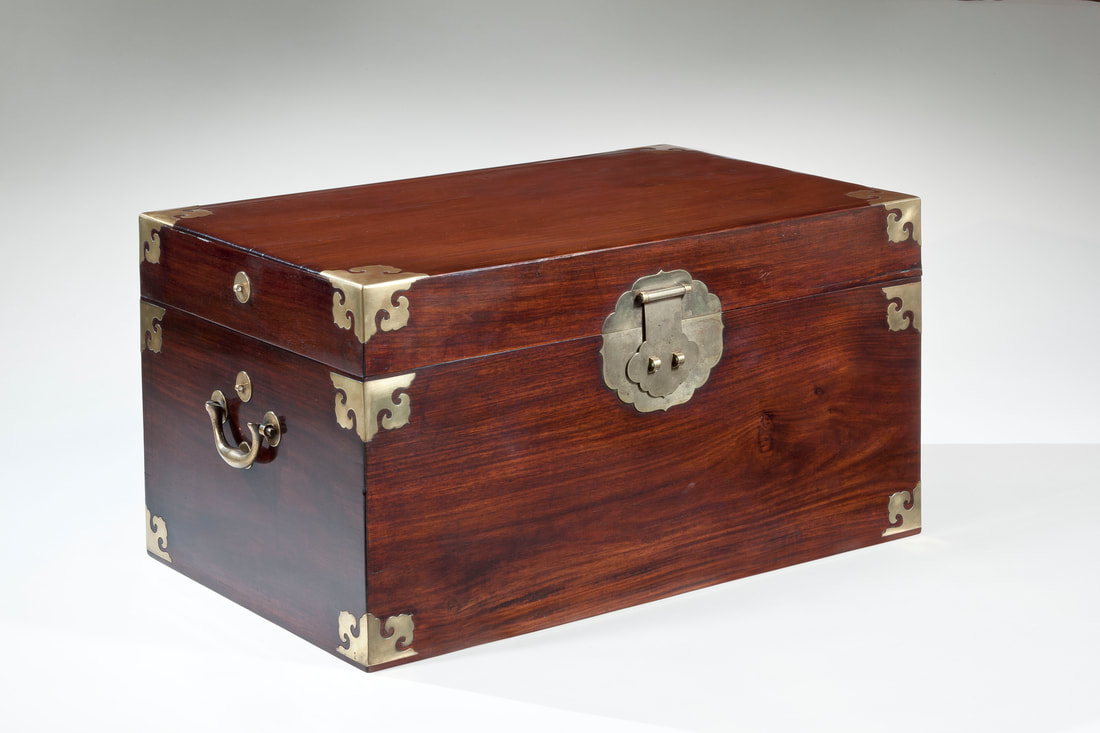 A large hongmu trunk with a single board top with two hidden tenoned transverse stretchers. The lower edge of the rising top has a recessed lip that locates into a similar lip to the upper edge of the lower section. The inlaid brass foliate lock plate has a cloud shaped hasp retained by split pins. The front and back are mitred and hidden dovetailed to the sides down to the two board tieli-mu base which is tongue and grooved into the inside edge of the vertical boards with two transverse stretchers hidden tenoned into the front and back. The top is pegged into the edge of the vertical members and inlaid with cloud shaped brass corners, as are the corners to the front back and sides of the upper section and lower section. Each side is mounted with brass C shaped handles with circular striking plate and backplanes and two backplanes to a connecting chain, all retained by split pins as are the inlaid back hinges. All the metalwork except the handles is replaced.
Qing dynasty, 18th century.

The arrangement of the metalwork on this box is unusual with cloud scroll motifs to the front sides and back and to both upper and lower section. A more typical arrangement is to be found on a similar huanghuali box illustrated on page 113 of The Dr. S. Yip collection of Classic Chinese Furniture 1991. 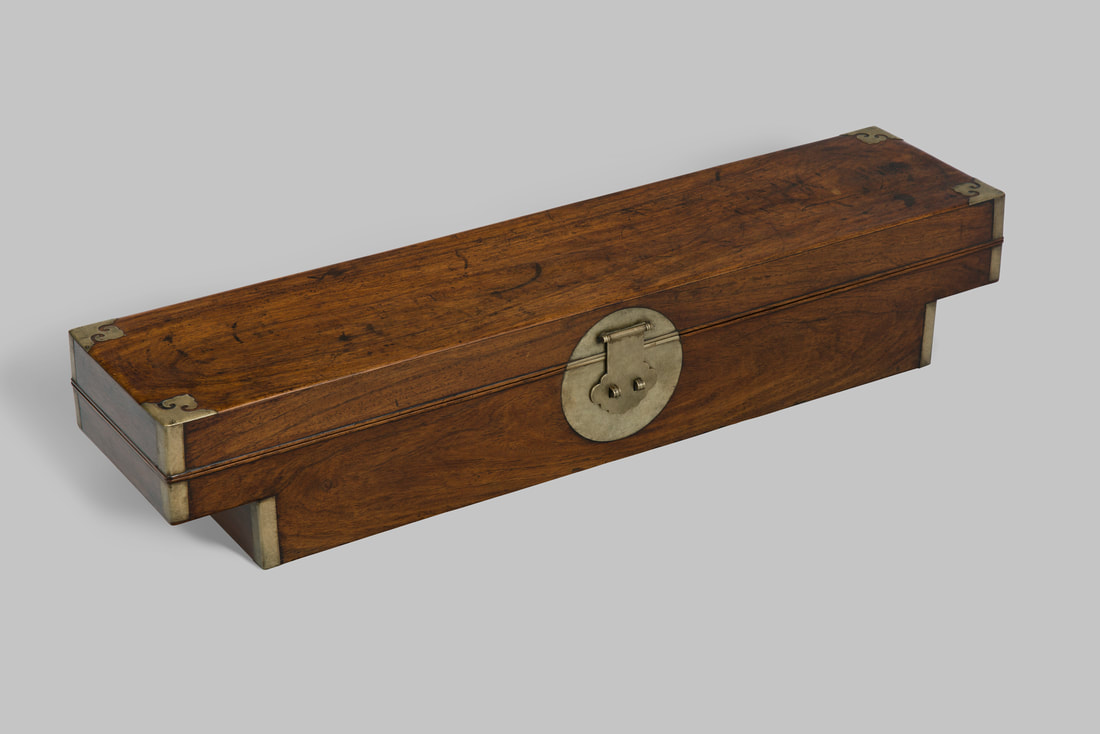 A huanghuali document box of truncated T-shape usually described as a sedan chair box. The rectangular top panel is butt jointed to the mitred and hidden dovetail frame that forms the cover with two transverse stretchers beneath. The lower section is similarly constructed with a tielimu base board tongue and grooved into the inside edge. The interior has a removeable tielimu tray with two hinged compartments. The circular inlaid baitong lock-plate with a cloud shaped-hasp retained by split pins and finished with a raised moulding, reflecting the moulding on the upper edge of the base and the lower edge of the cover. A small section of the baitong moulding has been replaced. The top face has inlaid cloud shaped corner pieces and inlaid straps to re-enforce the corners. Careful use of a single board to make the upper and lower faces of the front of this box is an unusual and attractive feature.
Late Ming – early Qing dynasty, 17th century.

For a similar “sedan chair document box’ and a discussion of its use see Robert Jacobsen ‘Classical Chinese Furniture in the Minneapolis Institute of Arts’, 1999, no. 74. 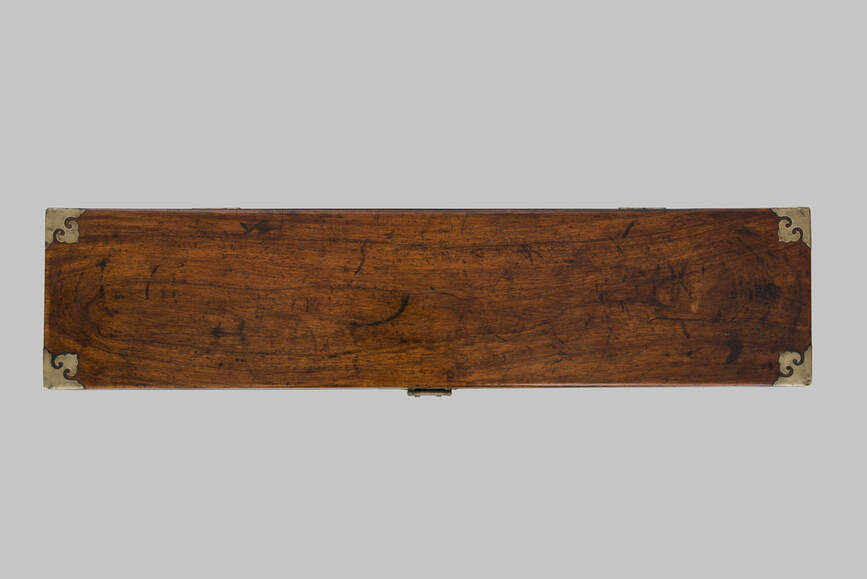 View of single board top with original metalwork 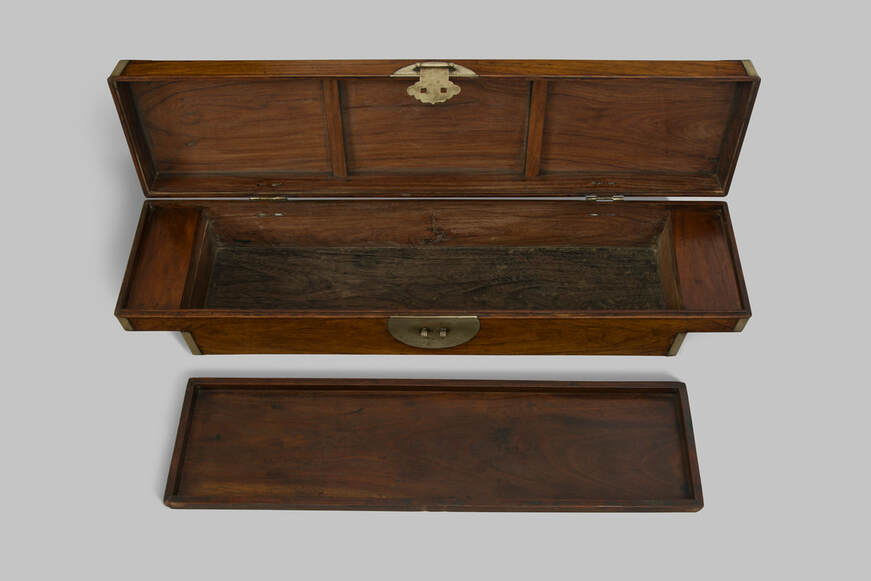 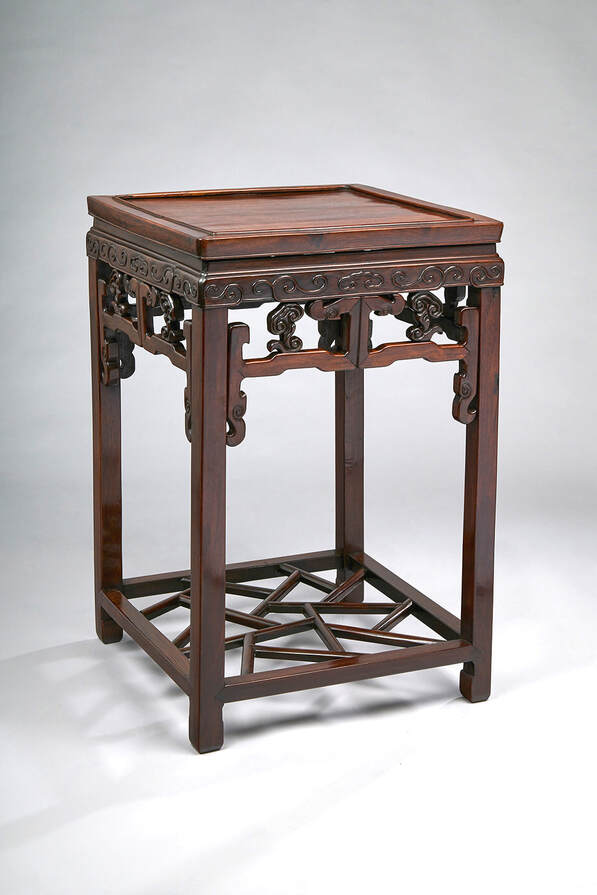 A hongmu square tea table or stand with a typical mitred, mortice and tenon frame with a slightly recessed panel with a raised bead to the inside edge of the frame. The outside edge of the frame curving down to a raised bead above the recessed waist. The apron, carved in high relief with a central, slightly flattened ruyi head flanked by scrolling tendrils is mitred at each corner and slightly proud of the undecorated square leg. Tenoned into the inside of each leg is a stretcher carved to simulate two highly stylised dragons, back to back, with a carved lingzhi fungus between the horizontal member of the stretcher and the underside of the apron. Joining the legs just above the foot are four stretchers joined by a ‘cracked ice’ design lattice.
Late Qing dynasty, circa 1870. 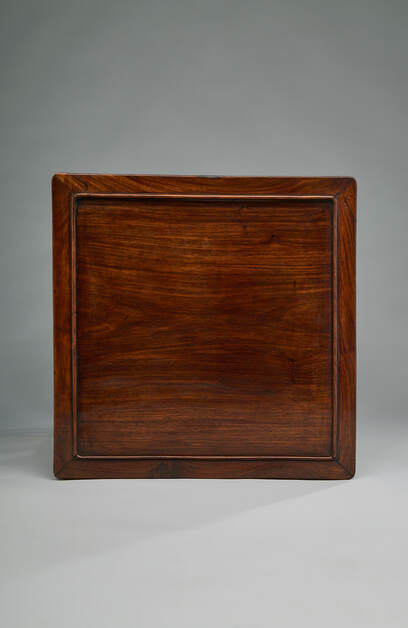 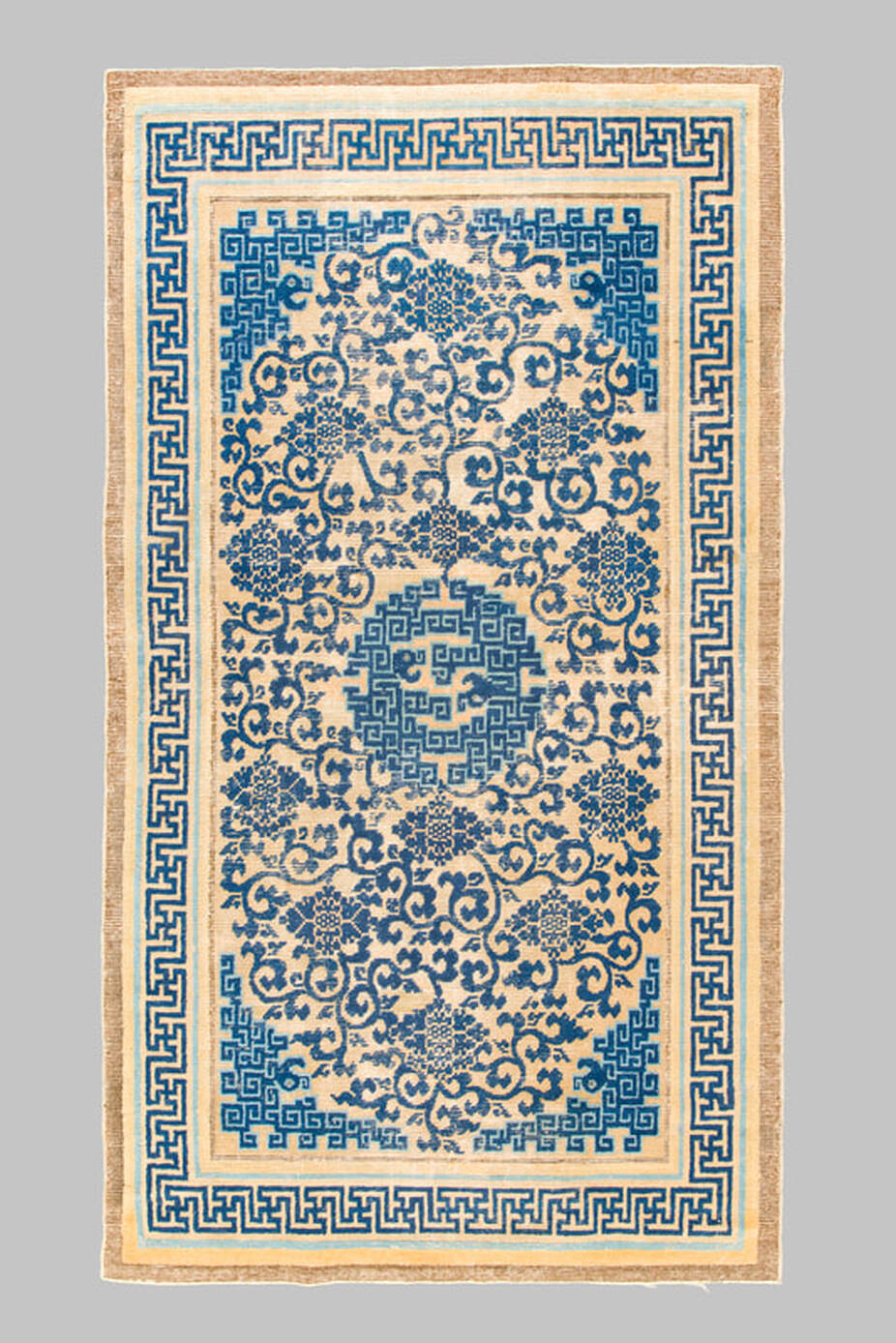 A Ningxia carpet, wool pile on a cotton foundation, with a field design of double stylised flowerheads (peonies?) connected by scrolling leafy foliage. The central medallion is composed of two angular confronted dragons and each corner spandrel of a similar single dragon. A narrow double line border of brown and pale yellow contains the field with a pale blue line border on either side of a continuous wan design also in blue with a, further, outer border of brown.
Ningxia, Western China, Late Kangxi – Yongzheng period, circa 1700 - 1735.

We tend to date this particular floral pattern in blue on what was originally a red background to the second half of the 17th century. Also, the perfection and clarity of the swastika border, originally on a red background, with the pattern reversing almost at the centre-points of the sides and ends with only slight correction and fore-shortening to compensate for miscalculation. The narrow grey/brown line, that separates field from the border and the border also originally on a red itself is typically edged with light-blue, soft red and yellow margins are all features typical of the oldest examples. Yet, the light-blue outlining to the fretwork, that is rather squashed in its drawing and the simplified face of the dragon we tend to associate with examples that we place to the end of the reign of the Kangxi emperor or indeed his son Yongzheng. We have no fixed points for the dating of any of these rugs, dating of wool or silk after 1550 using carbon-14 is invariable inaccurate or gives such a large range that it is not useful. Such rugs when they were first imported into America were dated to the Ming. Then a number of museum people rather foolishly wrote that no Chinese rugs survive from before 1800, that has been proved wrong both scientifically and through documents. The answer is probably somewhere in-between and so the date presented is just an opinion based upon the examination of over five hundred other examples all probably from this same general period. Tiffany, Yamanaka and Gump were the leading importers of Chinese carpets into America from 1901 to 1926, several of which came from the Forbidden City. Tiffany may well have relied on Frederick Moore who was in Peking (Beijing) to supply many of his carpets.

I am indebted to Michael Franses for his research on this carpet. 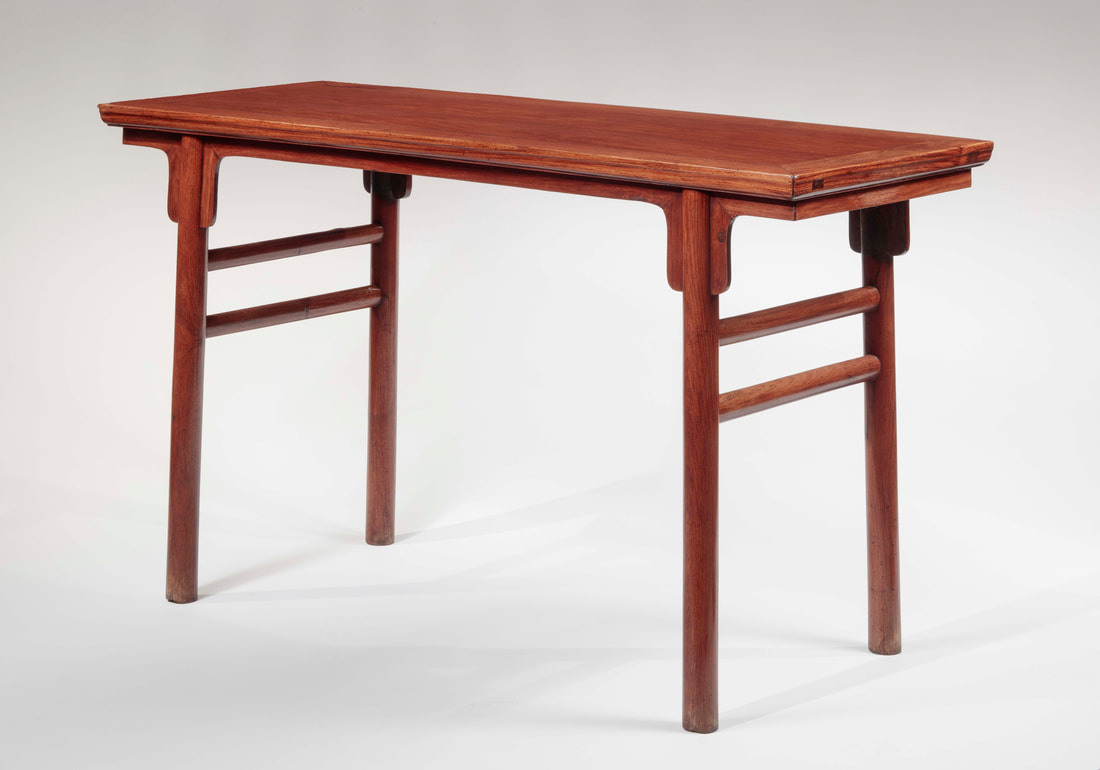 An inset leg bridle joint huanghuali table, the rectangular top of standard mitred, mortice and tenon construction with flush mounted two plank tongue and grooved floating panel top with exposed tenons in the short rails and five dovetailed transverse stretchers tenoned into the long rails. There is a small semi-circular patch to one outer edge of the frame. The edge of the mitred frame has a softly moulded section with a moulded bottom edge. The splay round legs are double morticed into the long members of the frame and are cut to fit over the mitred shaped spandrels of the apron, the long members of which are dovetail wedged into the top rails. Between the legs at each end are two oval section rails tenoned into the legs which are also splayed to the end elevation. The end aprons (replaced) are dovetailed to the long aprons, the underside showing signs of the original lacquer coating. Tape has been applied to the underside to hide the shrinkage between the boards at one end.
Late Ming / early Qing dynasty,17th century. 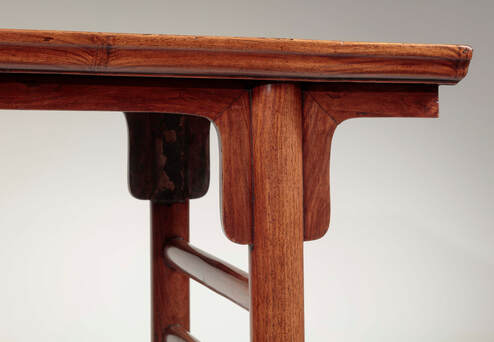 Detail of mitred and half-lapped spandrel

A bamboo “ladder” formed from a single piece of bamboo, split at the bottom to form a stable base with a straight stretcher fixed through two holes at the foot, Six “steps” emanate from the natural nodules of the bamboo stem on alternate sides with a very small “peg” at the top on the right hand side. The whole with a deep crusty patina worn smooth on each of the “steps” to a rich brown patina.
Qing dynasty, South-Western China, late 19th century. 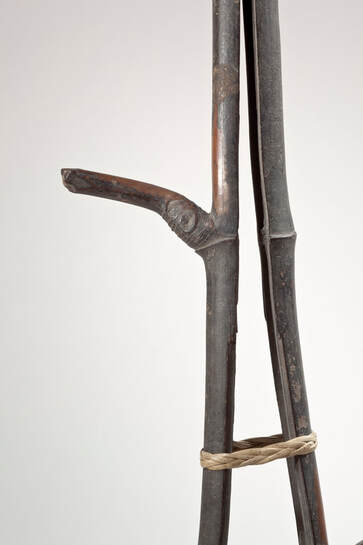 Detail of step from the reverse 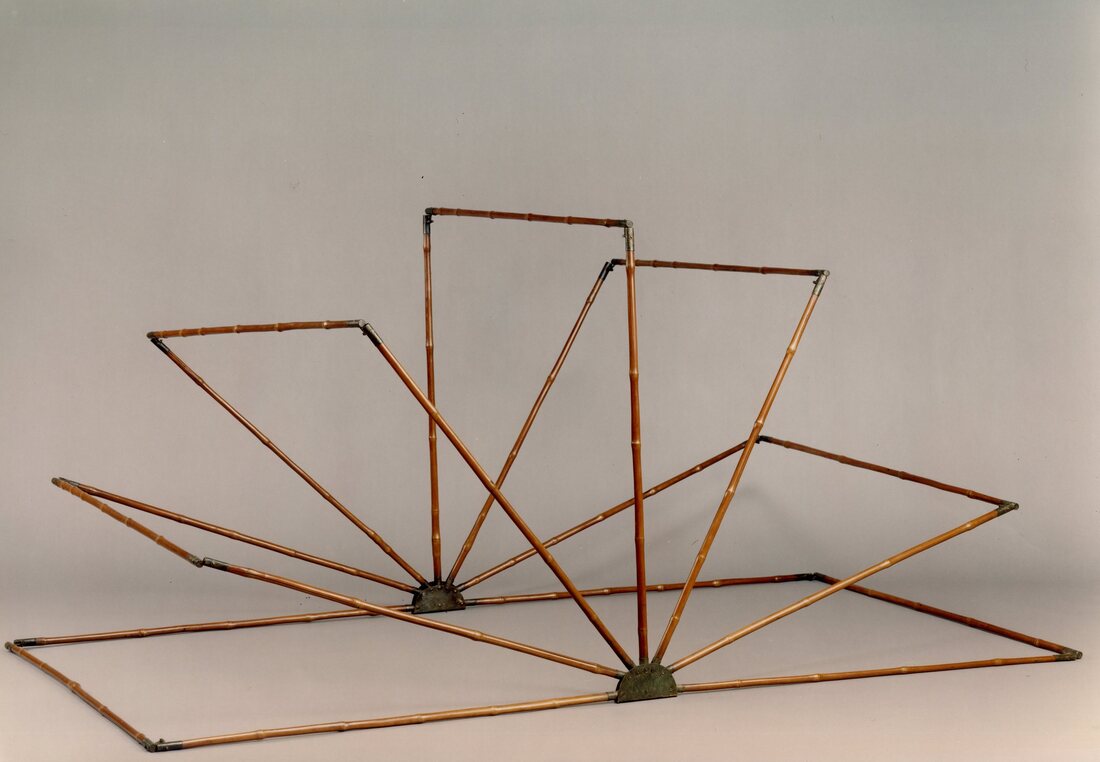 A bamboo folding frame, probably for a mosquito net, each circular section stay hinged at right angles to the next with metal mounts, probably huangdong, the base of which is affixed to a semicircular metal bracket, the nine stays creating a semicircular arc over which the mosquito net would be placed. There is a number of small repairs to the hinge joints. When disassembled the frame folds flat.
Qing dynasty, probably 18th or early 19th century. 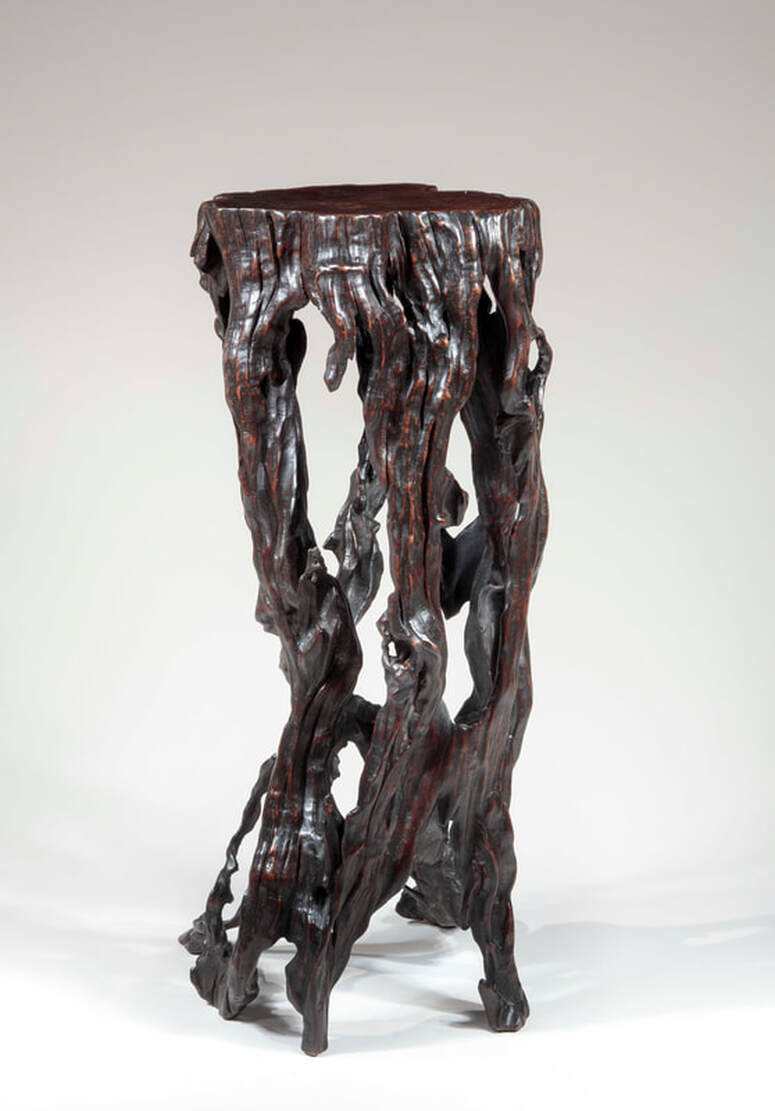 A natural elm (?) root stand of irregular twisting gnarled shape. The body of this stand seems to twist and swirl with multiple openings created by the natural root form, it narrows towards the base before spreading with two 'feet' at an angle balancing the non-centred top, and with two feet straight down. The beautifully figured elm top appears to be part of the natural form but must be inset although there is no obvious join.
Japanese, Edo period. 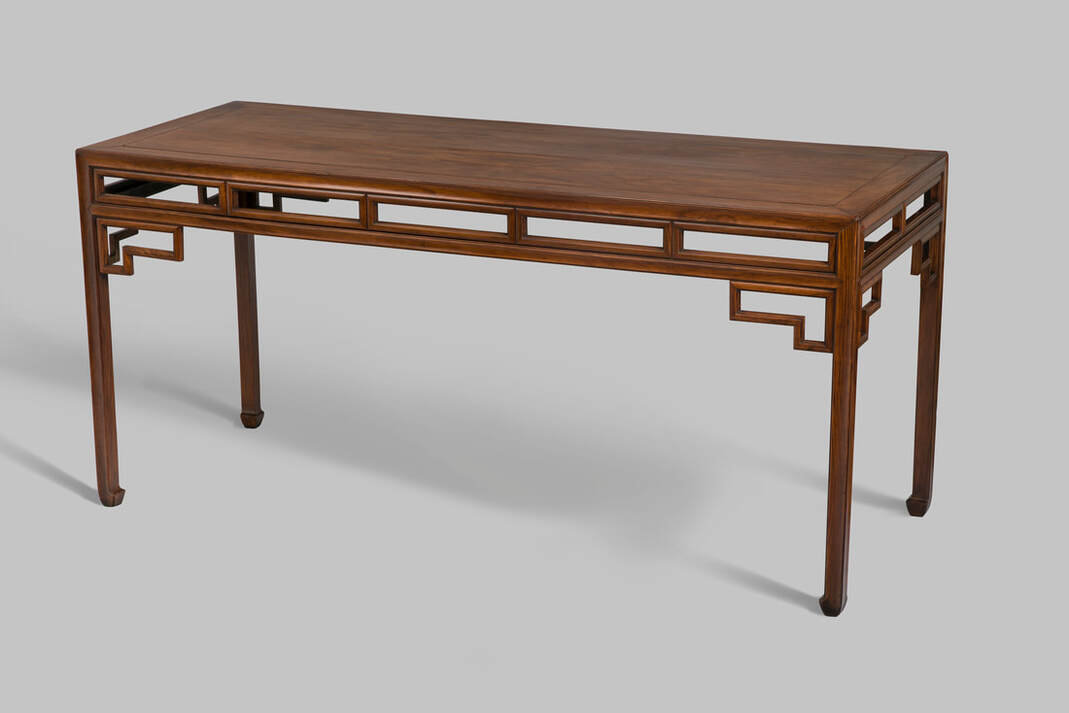 A huanghuali painting table of rectangular shape with typical mitred, mortice and tenon top with a two-plank floating centre panel supported by four dovetailed transverse stretchers which are hidden tenoned into the long rails. The outside edge at the top has a strong concave moulding with a small routed moulding to either side and is double-lock mitred, mortice and tenoned into the similarly finished legs which themselves terminate in very strong hoof feet. Four straight horizontal stretchers, legs and frame rectangular panels, four to each long side and two to the ends, each of these being of mitred, mortice and tenon construction with a gently curved profile stopping at a concave inside edge. This design is repeated in the corner brackets, all replaced, that are beneath the horizontal stretchers that are hidden tenoned into both the stretcher and the leg.
Late Ming – early Qing dynasty, 17th century.