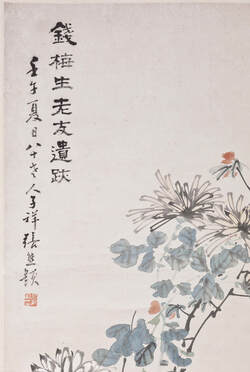 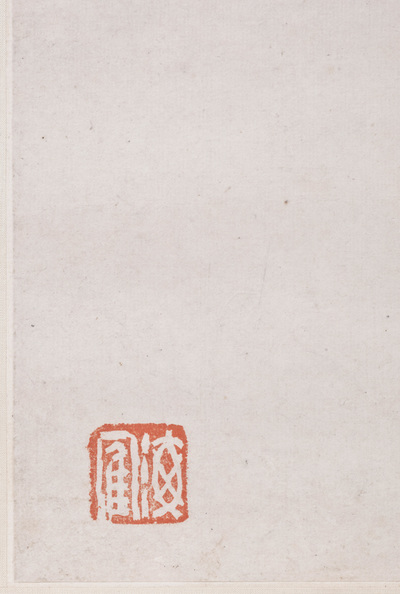 Qian Fengming, whose style name was Meisheng梅生and sobriquet was Haihe waishi 海鶴外史, came from Taicang in Jiangsu and belonged to the first generation of Shanghai school painters active in the city during the 1850s through the 1870s, a generation that also included Wang Li 王禮, Hu Yuan 胡遠and Zhang Xiong, the inscriber here. According to Haishang molin海上墨林, Qian started out as a portraitist, studying with his uncle, Li Ziqing 李子卿. Later, however, he abandoned portraiture in favor of flower-and-bird painting in the tradition of the eighteenth-century painter, Hua Yan 華喦.Second-generation Shanghai school artists such as Ren Yi 任頤and Zhu Cheng 朱偁drew partly upon Qian Fengming’s style of flower-and-bird painting to form their own styles. Collaborative works among Qian and these younger artists survive.

This hanging scroll is a fine example of Qian’s work from the 1870s, with his spirited brushwork and vivid sense of color on view. It depicts a common display in wealthy Shanghai residences of the time: combinations of crackle-glaze, modern-form flower vases, displayed on different levels. The artist has combined a range of autumnal flowers, with Buddha’s hand citrons and narcissus bulbscompleting the scene. The auspicious meanings carried by particular combinations of flowers and/or vegetables, made such still lifes widely popular in the city.

After a painter’s death unsigned works were often left over in the studio. With such works it was common practice to add one of the artist’s seals and seek an authenticating inscription from another respected artist. Zhang Xiong, a senior figure in the Shanghai art world of 1880, would have been an obvious choice. As his inscription states, the two men were old friends.
​