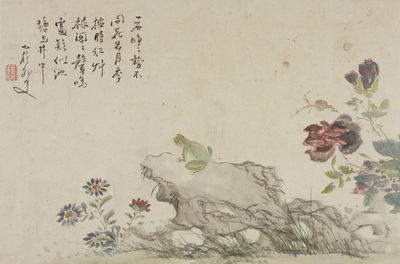 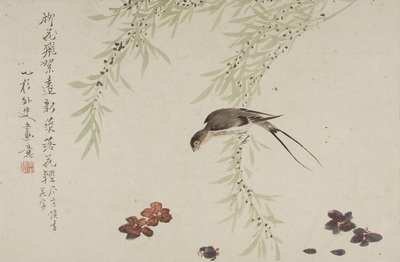 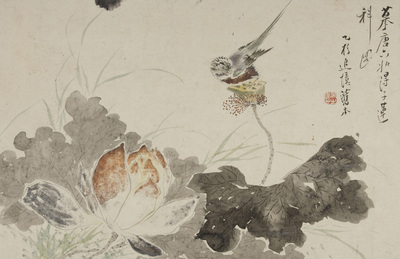 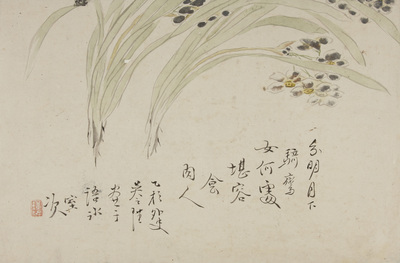 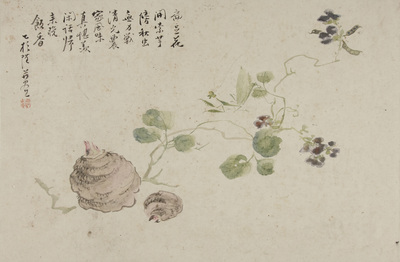 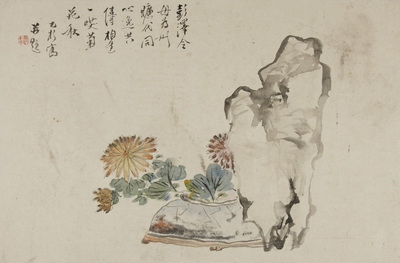 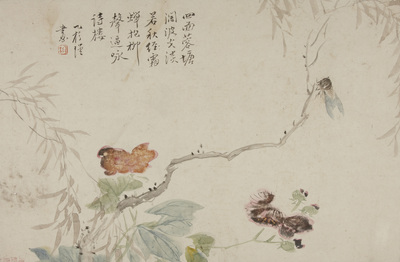 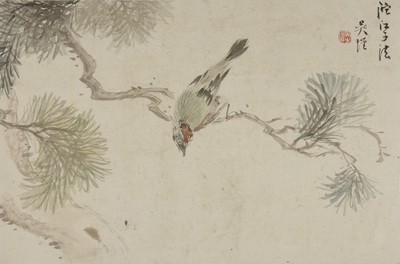 Album of Nature Vignettes and Epigraphic Inscriptions, eight leaves of painting in ink and color on paper, with eight facing leaves of calligraphy on paper, by Wu Zhiqin and Xue Chun, active during the Xianfeng reign, (1851-1861).

Wu Zhiqin, zi Yishan, is recorded as a skillful painter of birds and flowers, grasses and insects, who was active in Wuxing in Jiangsu province during the Xianfeng era (1851-1861). The present album confirms his reputation, with eight leaves depicting the subjects for which he was known. The eight facing leaves were inscribed by a single calligrapher by the name of Xue (?) Chun. The calligrapher’s contributions consist wholly of faithful copies of inscriptions on steles, monuments, bronze vessels, and other objects in diverse scripts and styles, which he would have known through ink rubbings. The pairing of lyrical nature paintings with scholarly epigraphic inscriptions, at first sight incongruous, was a characteristically nineteenth-century practice that brought together two complementary sides of contemporary literati culture. There is no reason to think that the calligraphies were added at a significantly later date, but one cannot be absolutely certain given that neither paintings nor calligraphies are dated.

leaf 1 a frog sitting on a rock, with roses and asters.
leaf 2 a swallow on a willow branch watching falling flowers (plum blossom?)
leaf 3 a bird perched on a lotus pod rising from a lotus pond, claimed to be after a composition by the Suzhou painter Tang Yin (1470-1524)
leaf 4 narcissi
leaf 5 taro together with a snow pea plant in flower, on which sits a praying mantis
leaf 6 a crackle-glazed water pot on a low wooden base holding sprays of chrysanthemums, and an ornamental rock without its wooden base
leaf 7 a cicada on a willow branch, above a flowering hibiscus
leaf 8 a songbird on a pine branch, screeching downwards, claimed to be in the style of the sixteenth-century Suzhou painter Chen Gua, son of Chen Chun (Chen Daofu, 1483-1544)

The references in Wu Zhiqin’s inscriptions to Ming dynasty Suzhou artists are consistent with Wu’s recorded association with Wuxing, near Suzhou, and suggest that he felt himself to belong to a local tradition of painting vignettes from nature. He was certainly justified in this belief, since compositions like that of leaf 4, and the subtle attention to color and light throughout, have their roots in mid-Ming Suzhou. His art also owes a more immediate debt, though, to eighteenth-century artists from elsewhere. The paintings of birds in particular show the influence of Hua Yan (who worked in Hangzhou and Yangzhou) in terms of color, immediacy, and drama. Similarly, the still-life type compositions in leaves 5 and 6 owe their casual effect to artists such as Li Shan and Gao Fenghan who were associated with Yangzhou.