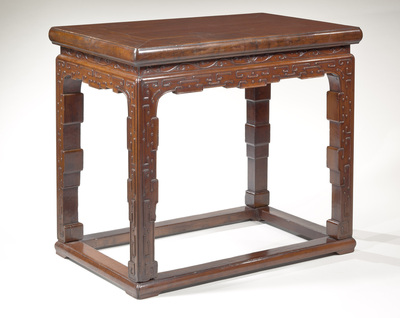 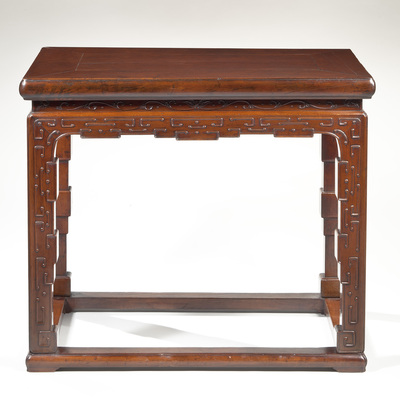 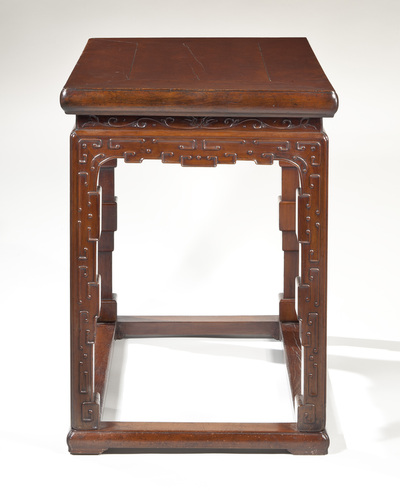 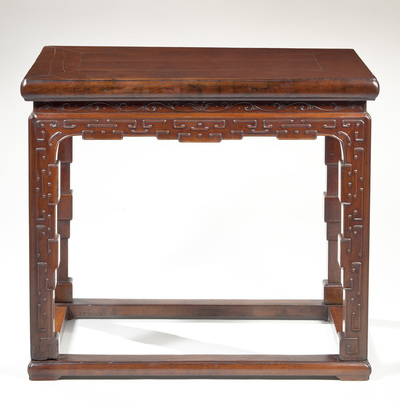 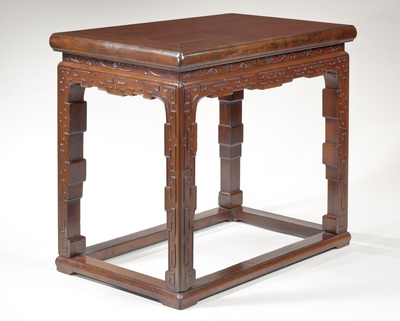 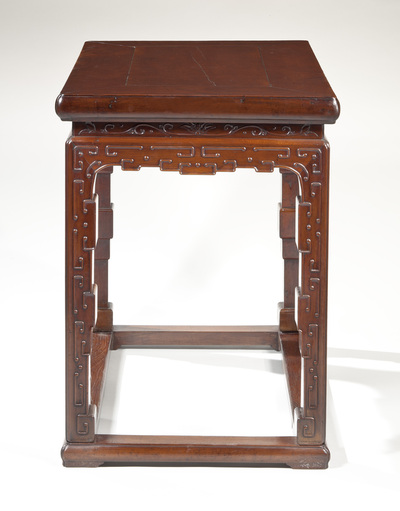 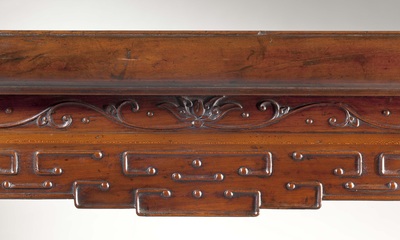 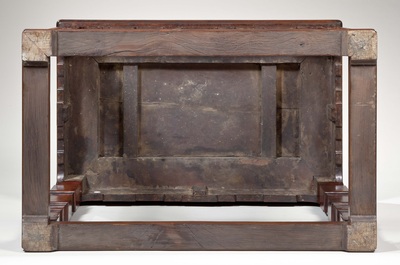 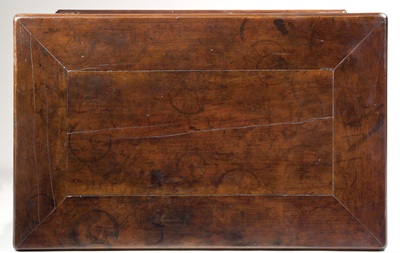 A rectangular altar table made of an unknown fruit wood, possibly hongdoshanmu (red bean spruce), with a very wide frame top with a unusually small flush floating panel tongue and grooved into the inside edge of the framing rails with two dovetailed transverse stretchers. There are no exposed tenons in either the long or short framing rails. The outside edge of the frame is finished with a small cut moulding above a gently convex face with a deeper tapering moulding below. The high waist, made in one piece with the apron, is carved in high relief with trailing floral tendrils interspersed with round beads with a central flower head with open petals to each side. The deep apron, mitred and half- lapped into the top of the legs,  carved on the lower edge with a raised bead, is decorated with high relief archaic motifs interspersed with more small round beads, a design which continues down the legs and terminates in a square foot, all cut rom the solid. A plain base stretcher, (replaced), is mitred and hidden tenoned at the corners and finished with a similar moulding and convex outer edge to the top frame has a small bracket foot to each corner finished with a concave moulding.
Qing dynasty,18th century.

In an article originally published in Orientations, May 1996, entitled ‘Side Tables, a Surface for Treasures and the Gods’ Sarah Handler discusses the difference between  tables made for domestic consumption and used as altar tables and those made for use in temples only as altar tables.

The massive construction of this table would indicate its use as a true altar table designed to support the weight of large incense burner or Buddhist figure. In his discussion of an archaic style altar table from the collection of C.L.Ma published in ‘C.L.Ma Collection: Traditional Chinese Furniture from the Greater Shanxi Region’, no. 70, pages 170 -171, Curtis Evarts says “This table has an archaic style which imitates the form and decoration found in ancient bronzes and jades - a style that attained unprecedented popularity during the late 18th century as a result of Qianlong’s fascination with ancient bronzes and jades. Furniture in such a style is generally associated with northern China” -  a description which applies equally well to the table here.

This table is some 10 cm lower than one would normally expect of an altar table made for a temple, it is possible that the replaced plain base stretcher was originally a low platform rather than a simple stretcher, which would elevate the height by this amount, or slightly more. Unfortunately to re-create a platform without any clues to its design would be impossible.