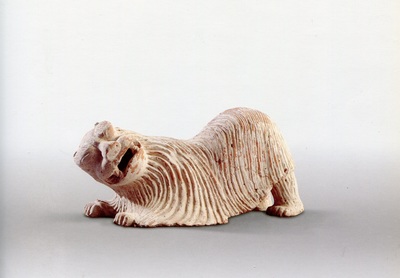 A pottery shaggy haired lion-dog, his hind-quarters sticking straight up in the air, heavy clawed front paws folded up beneath him. His coat is long and covers the whole of the body, the hair thick depicted by deep incised lines. The rather playful creature has a wide-open mouth, teeth bared, with wide flared nostrils and large eyes surrounded by hairy eyebrows. White slip still covers most of the body.
Early Tang period, 7th century.

This creature is almost a caricature of the lion-dogs used in lion dances and ceremonies. The lion dance seems to have been introduced into China from Western Asia during the Tang dynasty and is used as part of folklore tales and celebrations. For a discussion on lion-dogs and their depiction in textiles and carpets see an article by Hwee Lie The published in, ‘Lion-dogs, Hundred Antiques: Classical Chinese Carpets I, Textile Art Publications, 2000, pages 19-23.