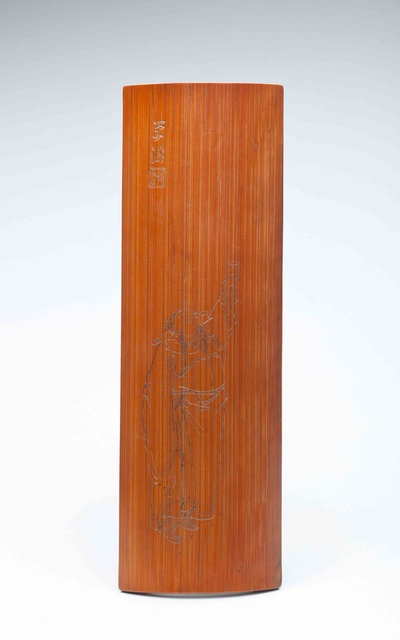 A bamboo wristrest, first half of the 19th century.

A typically curved bamboo wristrest delicately engraved with Li Bai drinking under the moon, holding his cup in an outstretched left hand as if toasting the moon (which is not depicted on the wristrest), to the upper left a signature Xue hai and the seal Zhao. The reverse carefully finished with each edge cut with a concave moulding above a chamfered edge with a foot to each corner.
Qing dynasty, first half of the 19th century.

Zhao Xuehai was a native of Jiading in Jiangsu province and is listed in 'Chinese Bamboo Carving' Part II, Hong Kong Museum of Art, no. 22, page 44 as being "skilled in carving in relief and engraving, particularly figures and landscapes". Zhao Xuehai is also mentioned by R.Soame Jenyns and William Watson in 'Chinese Art, Gold, Silver, Later Bronzes, Cloisonne, Cantonese Enamel, Lacquer, Furniture, Wood', Vol.II, as Miss Chiao Hsueh-hai who was recorded as "extremely good at carving peach stones into various forms of boats" although he does not mention from whence this information is taken.

Drinking Alone With The Moon

“From a pot of wine among the flowers
I drink alone. There was no one with me-
Till, raising my cup, I asked the bright moon
To bring me my shadow and make us three.
Alas, the moon was unable to drink
And my shadow tagged me vacantly;
But still for a while I had these friends
To cheer me through the end of spring....
I sang. The moon encouraged me.
I danced. My shadow tumbled after.
As long as I knew, we were boon companions.
And then I was drunk, and we lost one another.
.....Shall goodwill ever be secure?
I watch the long road of the River of Stars”.