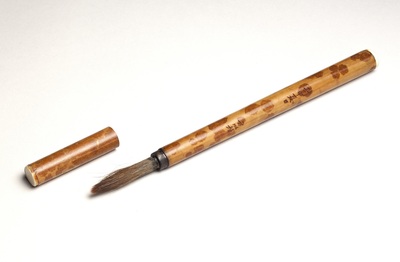 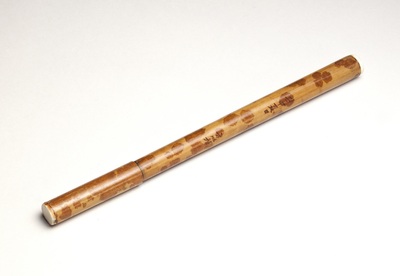 
A spotted bamboo brush of slightly tapering cylindrical shape to the brush socle, the end and cover capped with flat ivory discs.
The body of the handle with an inscription “On a summer’s day in the year renshen” (1632) and “Fang Yizhi”.
Probably late Qing dynasty or early Republic period.

Fang Yizhi (1611-1671) was one of the notable figures of the Ming / Qing transition period as a scholar and philosopher as well as, to a lesser extent, a painter.
He was a native of Anhui, born in the city of Tongcheng. His family included scholars and government officials and Fang Yizhi in his turn accepted an appointment to the Hanlin academy following his success in the jinshi examinations in 1640. The fall of Beijing four years later to the conquering Manchus terminated his official career, leading to years travelling through southern China evading the Qing forces. Finally captured in 1650 having tonsured himself and taken the guise of a Buddhist monk, he was released upon repeated refusal to serve the Manchu government. He committed suicide in 1671.
(Extracted from ‘Shadows of Mt.Huang, Chinese Painting and Printing of the Anhui School’, James Cahill (ed.) 1981.)
Towards the end of the Qing dynasty and early Republican period there was revival of interest in late Ming intellectuals who had martyred themselves to the cause and the likelihood is that this brush dates from that period, the inscription being commemorative of Fang Yizhi’s stand against the Manchus.