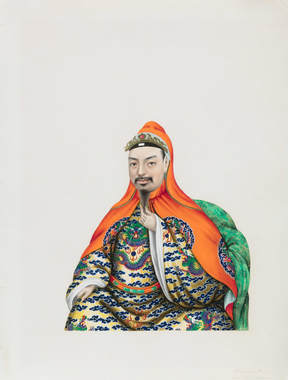 Portrait in opaque watercolour on Western paper stock of Hong Xiuquan attributed to Tingqua (Guan Lianchang; 1809–1870), originally from a now-separated album with dedicatory inscription in German corresponding to “Shanghai March 1861,” the likely date of its assembly. Another painting in the same dispersed album bears the date December 6, 1856.


Shown seated in what appears to be a horseshoe-back armchair that is covered with a green brocade cloth patterned with flowerheads, the figure wears a sixteenth-century Ming-style robe with five-claw flaming dragons and white underrobe, indicated at the wrists. He wears around his forehead a band of pale blue silk embroidered with gold thread and a central ruby cabochon and an orange scarf with yellow borders and roundels of dragons, draped fully around his body and drawn at the neck. Around his waist is an orange belt decorated with green jade plaques. Arresting features of the portrait are his large eyes gazing directly at the viewer and beard that he fingers provocatively with a slight smile.

The sitter is presumed to be Hong Xiuquan, the self-proclaimed ruler of the Heavenly Kingdom of Great Peace (Taiping Tianguo), a cult of millions who saw him as the self-styled Chinese son of the Christian Holy Father, in other words, the younger brother of Jesus. He dispensed with the Qing-mandated hairstyle, the Manchu queue, and wore a beard. He established himself as Heavenly King (Tianwang) of a disciplined army of a million women and men that conquered the southern city of Nanjing. Hong committed suicide just before the recapture of Nanjing by Qing imperial forces in 1864. In the fourteen-year course of his fanatical proselytizing and subsequent reprisals by the Qing, up to 20 million of Hong’s followers lost their lives.

The Swedish-born missionary Theodore Hamberg (1819–1854) records that Hong had an oval face, fair complexion, large and bright eyes and a long and sandy beard (Hamberg, The visions of Hung-Siu-tshuen, and origin of the Kwang-si insurrection [Hong Kong: The China Mail Office, 1854], page 14). Here, the sitter wears the yellow robe embellished with flaming dragons emblematic of a king or grand councilor, as designated by the Kingdom in 1854. However, the sitter’s headwear is not the yellow hood or scarf associated with the Heavenly King but a red hood worn by a marquis (hou) or marshall (sima).

There is an ink inscription in the lower right of the portrait, Taiping Wong, Rebellen Kaiser (King of the Taiping rebels).

We are indebted to Ho Mei Yee and Linda Wrigglesworth for their comments on the portrait.