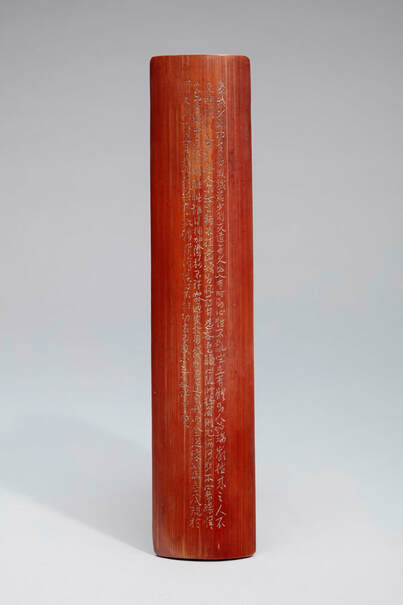 The calligraphy inscribed on the wrist rest is the essay Dushu Zhen讀書箴(Admonition on Study), written by Fang Xiaoru 方孝孺(1357–1402; also named Fang Zhengxue 方正學), an orthodox Confucian scholar-bureaucrat of the Ming dynasty. He was executed because he refused to write an inaugural address for Emperor Yongle (r. 1402–24), who usurped the throne from his nephew, Emperor Jianwen (r. 1398-1402). The lines read:

To achieve good workmanship, one should spend less time gathering and chatting [with
others].
To promote longer lasting friendships, one should not always crack jokes.
Working and resting according to schedule prevents one’s mind from being disturbed by intrusive thoughts.
Sitting and standing with dignity cultivates one’s graceful and rigorous dispositions.
Do not have dealings with people behaving badly, and no one can impede you.
Do not use affectionate forms to address others, and you avoid being accused of flirting.
Reflect on your unpleasantness and arrogance [towards others] profoundly, and faults and remorse will be reduced.
Restrain your agitated temper and chaotic emotions gradually, and petty grievances will not affect you.
To be an honest and generous person, one should not involve oneself in shady deals and should be tolerant of mistakes made by peers.
To reap substantial rewards, one should follow good advice readily and unselfishly provide admonishments to teachers and friends.
Being gregarious, encouraging,
determined and studious
not only guarantees your success,
but also influences your temperament.