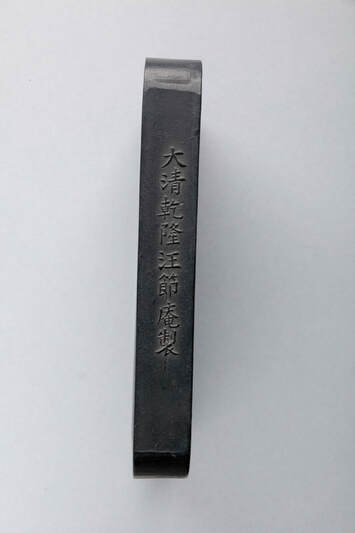 A square ink cake moulded with a scene from the poem “Ode to the Ink” by the Qianlong emperor, Qianlong period (1736–1795)

A nearly square ink cake with rounded corners and raised, flat border moulded with a scene from the Emperor Qianlong’s poem 詠墨詩, “Ode to the Ink.” The scene shows two figures, in what appears to be deep discussion,seated on drum stools in a pavilion surrounded by trees and rocks enclosed by a fence. A crane stands on one leg in the foreground and a smaller pavilion is in the upper right beside the garden stream. The reverse, within the same raised, flat border, is moulded with lotuses and many other flowers surrounding a raised, central square reserve with the inscription 喚卿呼子謂多事read as
“There is no need to summon officials and youths [to come view the ink].” The side of the ink is moulded in relief with the inscription 大清乾隆汪節庵製“Produced by Wang Jie’an during the reign of Emperor Qianlong of the Great Qing.”
China. Qing dynasty, Qianlong period (1736–1795).

The Emperor Qianlong’s poem “Ode to the Ink” reads:


Wang Jie’an, also named Wang Xuanli 汪宣禮and Wang Rongwu 汪蓉塢, is a native of County She, Anhui Province. He earned a living as an ink producer. His Hanpu Zhai 函璞齋(Jade Containing Studio) was one of the most famous ink stores during the reign of the emperors Qianlong, Jiaqing and Daoguang. His writings include Record of Ink by Hanpu Zhai函璞齋墨譜, which documented more than eighty types of ink.